Phoebe loves a good bath and so finding herself in there at 12pm in the afternoon was a real treat! The events leading up to that early bath involved splattered, smeared and smudged paint, cut grass which found its way into every nook and cranny, along with a nice portion of green rice. No this wasn’t some ultra modern nouvelle cuisine, this was a morning spent at the Wimbledon themed Mucky Monkeys!

For anyone that isn’t familiar with messy play it’s a session where you can switch off your ‘no’ button. If you find yourself constantly saying, “put it down”, “don’t touch that”, “take it out of your mouth” then this class will give you a welcome break from the sound of your own voice. The session is set up for free play where babies and toddlers can explore a range of different stations often including paint, food, water and anything that has an interesting texture or feel. The idea is that mess is allowed, in fact, the messier, the better! You can choose to dress them (or undress them) however you wish to avoid ruining any of those designer baby clothes and all resources used are baby friendly so you don’t have to worry about them chewing their way through whatever it is they pick up. Every week has a new theme, a class will never be repeated in a yearly cycle, keeping it fresh for those regular monkeys. This way we try to always make the classes new and exciting for little monkeys. There are also a few different styles of class, suitable right from birth, up to adults!

As you can see Phoebe fully embraced the ethos of the session and made sure that mummy got involved too. I later found red paint smeared down the back of my neck whilst out for lunch in town! Thanks Pheebs! 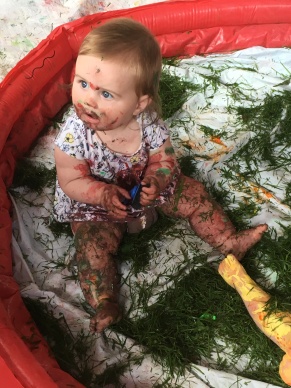